After passing the state falconry exam, I invited everyone I knew in the world of falconry down to Marion County for a bit of rabbit and squirrel hawking. With deer season over, and small game season ending soon this would be the last chance for a local hunt with everyone in attendance.

We decided to meet at the local Wal-Mart around 6am. There was a dense fog that morning and we decided to grab a bite to eat prior to heading out. I had already selected the morning hunt location, a public area with limited use and nice road access. We hunted the area with a female Harris for about two hours with NO signs of life. Disappointed and feeling like I had let my new companions down, we made the call to shift locations. After a twenty-minute ride to my families land we put another bird in the air, a passage red-tail that followed like a 2nd season bird. We walked a 20 acre block and after NO signs of game, we called the bird down and decided to take a lunch break. 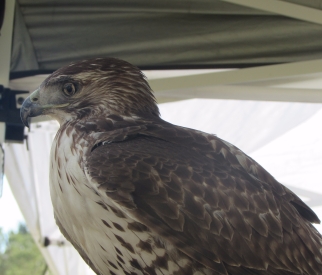 My step-father served smoked pork sandwiches and a few sides to go with it. After a pleasant lunch in the shade we sat around and talked for a while. There were four falconers, two fresh apprentices and two guys that were interested in becoming apprentices.

After the wonderful lunch we flew a small male Harris, and put him on 3 squirrels with no success. The squirrels would find holes before he could get to them. Feeling defeated, we headed home with the harris in tow right behind us. This little guy is my favorite to watch in action, he is well-trained and hunts great(provided if we can actually put him on game). I would love to fly a wild trapped harris in the 650-750g weight range. While most people are going after XL size birds, I feel like the slightly smaller birds are better suited for me as long as their feet are big enough to do the job. Naturally, I’m not going to be picky for my apprenticeship birds( as long as the bird is healthy I’ll be satisfied).

Published by The Goose

View all posts by The Goose

1 thought on “Hawking at the house…”